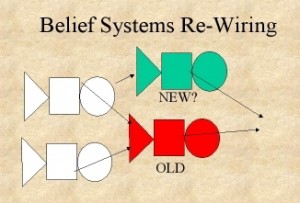 Belief Craft is the marriage of Knowledge Engineering (KE) and Sleight of Mouth (SOM). KE evolved from Jonathan Altfeld’s work as a programmer in the field of Artificial Intelligence (AI). In exploring how to make a computer think like a human (what AI is all about) Jonathan discovered that beliefs are the operative functional units of behavior and that ALL beliefs have the same STRUCTURE. That structure is as follows: Cause – Effect – Meaning. This three part structure is also know as the “Normalized Belief Structure” or NBS.

This is why BC can be so much more subtle that SOM and, therefore, more effective.

WIRING AROUND A BELIEF

Let me give you a real life example. I had a Coaching client recently who wanted to lose a few pounds and had never been able to both lose the weight and keep it off. One of the strategies I asked her to adopt was to keep a food journal. I asked her to write down in a little notebook everything she ate everyday. (This strategy is a proven boon to weight loss because it makes unconscious behaviors conscious.)

My client was unable to successfully accomplish simple task. When I asked her what prevented from doing it she said that it just felt like punishment.

I said, “Punishment? What do you mean it feels like punishment?”

She said, “Well, when I’m about to eat something I like I know I’m going to get scolded for it.”

I asked for clarification so I could feel confident I was getting the structure of her belief accurately. “So, IF you eat something you like, THEN you’ll get punished?”

“So what does getting punished for eating something you like mean to you?”

“It means I’m going to eat in secret.”

I thought for a moment, pondering this. I immediately thought of a number of SOM reframes I could use in that circumstance, but I also wondered how I could use Belief Craft to be even more effective so that old belief of hers just didn’t get fired.

So I back-tracked her belief a bit.

“No. I’ve been making much better food choices lately and learned to like lots of healthy foods. I love fresh seasonal fruit and vegetables and love exploring the farmer’s market and trying new things.”

“And you get punished for that?”

“No! Not for that! Only for things like sweets and chocolate and stuff.”

“Ah. So it’s really IF you eat things like sweets and chocolate, THEN you get punished?”

“But some foods you can like and NOT get punished for eating?”

“Yes, if they are healthy for me.”

So – what I was noticing here is that her first NBS, “IF I eat something I like, THEN I’ll get punished which MEANS I’m going to eat in secret,” would no longer fire if I could successfully change her belief about what is meant by “a food she likes.”

So I asked her, “What if you knew that there was no such thing as a bad food? What if even sweets and chocolate could be part of a healthy living plan?”

“Not at all. Many fit, trim and healthy people include sweets and chocolate in their diet. Dark chocolate is even recommended because of all the anti-oxidants in it. Some people compensate by exercising a little bit more, others just are very cognizant of the amounts they eat and include it in their calorie count for the day. Bottom line is it comes down to Mindfulness. IF you write down what you are eating THEN you are being mindful and that MEANS you can eat those things that make you feel good.”

She paused for a minute, her eyes defocused as if gazing into space.

“IF I write down what I am eating THEN I’m being mindful and that MEANS I can eat those things that make me feel good?”

This new belief had the added benefit of being true, in my model of the world at least, so that always makes things easier. It certainly appeared that this use of Belief Craft had worked like a charm. She began writing down everything she ate and, from that day forward, she is happily losing weight and getting trim in a way that she’ll be able to maintain for a lifetime. The old NBS just doesn’t fire anymore, thanks to Belief Craft.