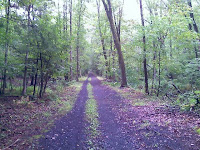 I’ve lost count of how many marathons I’ve run. It’s under 18 and more than 12.
Along the way I’ve run thousands of miles in an effort to get in shape enough to run them well and ultimately qualify for Boston. The thing is, I can’t really do that anymore. I mean, never say never, but it would appear my calf muscles have other ideas. Every time I get competitive and try to race or do too much, they cramp or tear or do something dreadfully painful.

I am endeavoring to embrace my limitations… to thoroughly enjoy what I CAN do.

The other day I was out running ( I still call it running although I believe many people can walk at a faster clip) along this beautiful rail trail in upstate New York. And with every step I took I attempted to just be in the moment and savor the full sensory experience along the way. It was like what Stephen Wolinsky calls a “no-trance trance.” In other words, not trancing out by age regression or imagining the future, but being simply in the here and now – which is for most people an altered state.

It’s a lovely practice… listening to the breathing, feeling the feet on the changing surface of the trail, appreciating all the different colors of the leaves and the dirt and the stones, smelling the variety of fragrances as I pass streams and farm land and cut grass.

Dave Dobson used to call himself a “De-Hypnotist.” He said that people were in trance most of the time and it was his job to wake them up. Not to “hypnotize” them but to pop them out of their old, habitual trances and get them to adopt new, more productive trances.

I think Steve Wolinsky would agree. In his book, “Trances People Live,” he draws a parallel between what meditators call Samadhi and Erickson called a “Therapeutic Trance.” Saying they were in fact the same state – what Wolinsky termed the “No-Trance trance.”

Maybe this is what my calf muscles have been trying to get me to do.