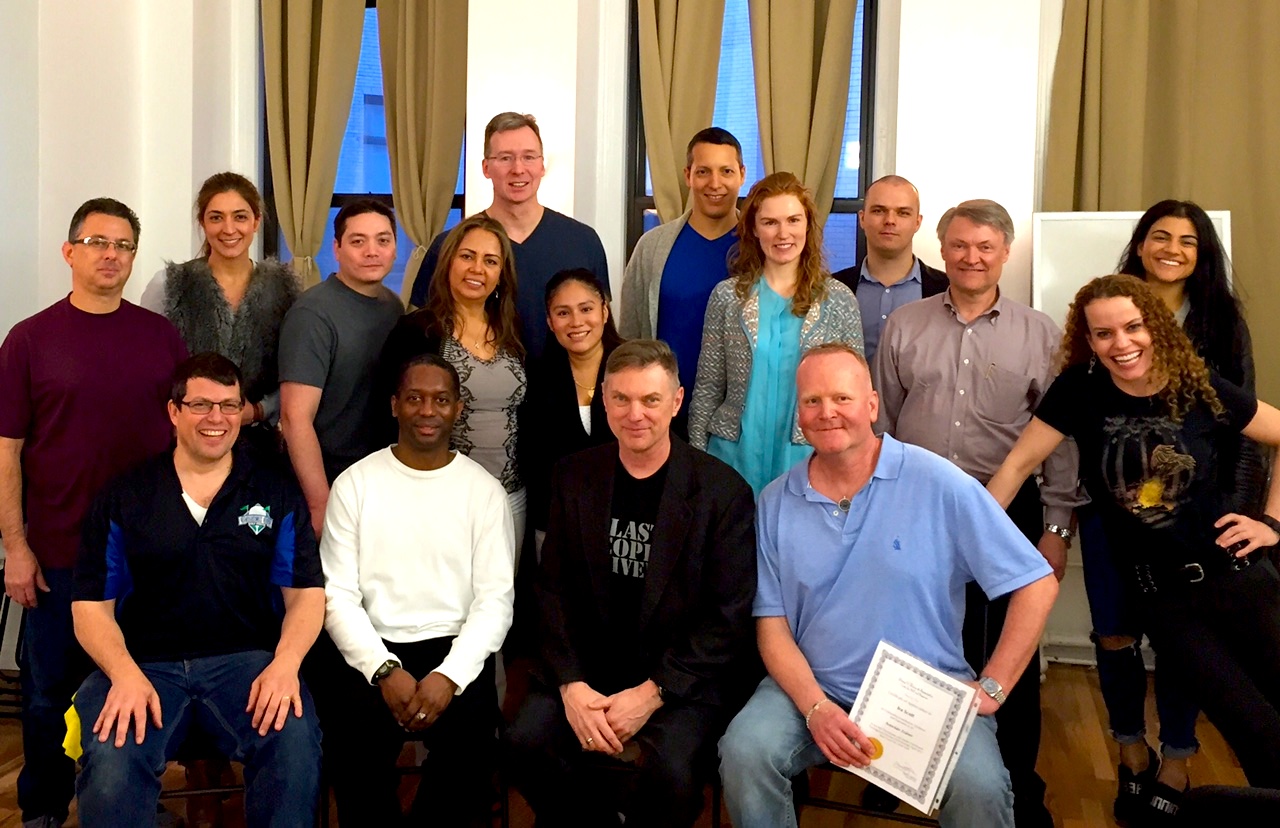 NOT A SINGLE APRIL FOOL

This past weekend I had the pleasure of certifying a fresh batch of NLP Practitioners and NLP Master Practitioners after seven months of a training that started last September. With all due respect to past classes I’ve taught, this group was exceptional. Not a slacker in the bunch.

Of course, there are multiple reasons for this, but much credit must be given to my exceptional group of associate trainers, (pictured with me in the front row) Frank Clark, John Johnson and Ira Scott and the gifted and wonderful Lana Popovic (missing from the photo).

As a trainer of NLP, I endeavor to make our seminars better each we do them time and am always adding to and refining what we do. The seven-month format we just completed (7, 2-day weekends over 7 months for 14 days total) has a great deal of merit and some challenges. All formats have advantages and disadvantages. When we do it next this fall it’ll probably be offered in a more compact format, 7 weekends in 3 1/2 months.

Where NLP and Hypnosis meet

Years ago, when I took my first NLP Certification (14 days in a row) from Anthony Robbins and other guest trainers, I kept hearing people talk about Dr. Milton Erickson and Ericksonian Hypnosis. It became clear that much of what I’d come to think of as NLP had been derived from Erickson’s work. Dr. Erickson had a remarkable ability to put people into hypnotic trance conversationally and by telling stories. It was said that some NLP trainers were so good at NLP’s “Milton model” that they could do the same thing. I was intrigued. I really wanted to learn how to do that but unfortunately Milton Erickson had died several years earlier. I wasn’t going to learning anything from him – at least not directly.

However, my curiosity was soon to be reignited when one of Tony’s guest presenters arrived to do his portion of the seminar. Dr. Dave Dobson was kind-of the “anti-Tony.” Where Tony was fast paced, hyper energy, Mr. Healthy, Dave was slow paced, chubby with a grey beard and smoked cigarettes. He strolled out onto stage making no effort to crank up the crowd and slowly started telling stories. I found him engaging and funny so was rather shocked to see how many of my classmates were looking like they were dozing off. Then it suddenly occurred to me that they were not falling asleep but were actually going into trance. There it was! He was doing that Ericksonian thing – hypnotizing the entire audience conversationally without them knowing what he was doing!

So it was that later that year I packed myself off to Friday Harbor, Washington to attend Dave’s two-week “fun shop” (he didn’t like “workshops”) to learn more of this Ericksonian approach of doing Hypnosis.

It was midway through the first day of the seminar that Dave happened to mention that he didn’t consider what he was doing to be Ericksonian Hypnosis. Turns out Dave developed his methods separately from Milton and, while very similar and parallel to Erickson’s approach, quite different as well. He called his methods “Other-Than-Conscious-Communication” and was very adamant that they were distinct and different from Erickson’s methods. Being that I didn’t yet know what those differences were, it didn’t really matter. I learned a vast amount over those two weeks (even though I was in a trance for much of it) and found myself just basically functioning better by the time I returned to New York. Everything I’d learned about NLP made more sense and worked more effortlessly. It was a great experience that I would return to redo four more times over the next twenty years. And yet, I still wanted more.

It took me quite a while to track down and study with actual Ericksonians who would let me attend their seminars to begin to get a clear understanding of what constituted Ericksonian Hypnotherapy. However, each of these different people I studied with had a different way of going about it. There didn’t seem to be one, single agreed upon method of doing Ericksonian Hypnosis.